More than 500 activists marched through downtown Seattle, disrupting shopping at times as they entered Macy’s, Forever 21, Pacific Place and Westlake Mall. Activists started in Westlake Park, eventually moving to stores in the area, chanting “Whose lives matter? Black Lives Matter!” as shoppers scurried by, clutching their recently purchased Black Friday deals. At times, demonstrators were stopped at one door by police or security, only to open another door and walk in. 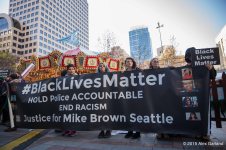 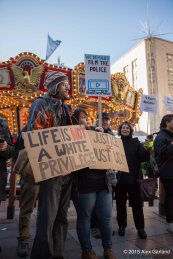 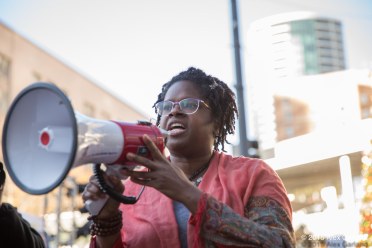 While in stores or malls, activists sang and chanted “Same story every time, being black is not a crime” as they walked through, some carrying signs and banners. In Forever 21, shoppers were seen continuing to browse sale racks as activists walked by, demanding an end to the murder of black and brown lives at the hands of police. In other stores, employees could be seen closing and locking doors or standing in front of them, only allowing “shoppers” through. 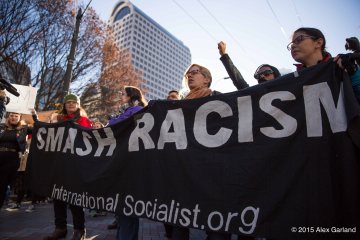 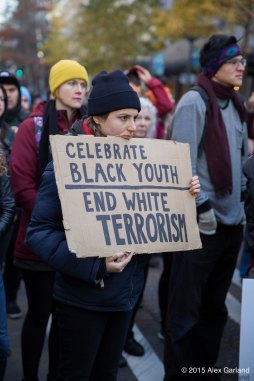 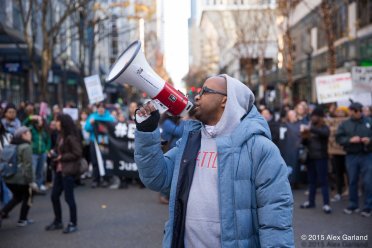 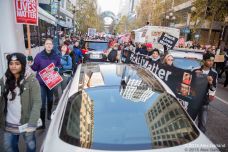 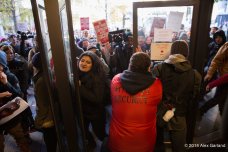 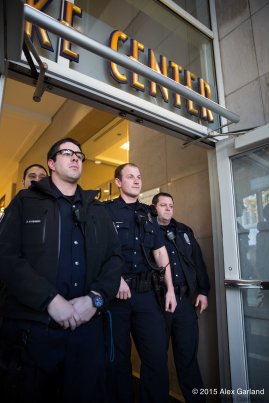 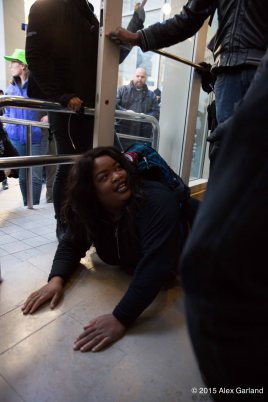 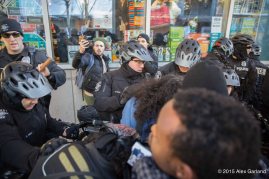 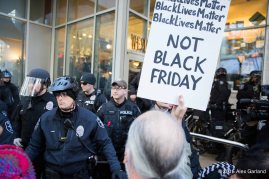 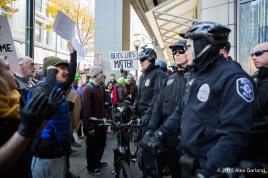 Police were seen blocking sidewalks and streets, telling demonstrators to “walk around” the buildings, which they did, only to have demonstrators form on both sides of the police line. Some not associated with the demonstration could he heard yelling “All Lives Matter”, prompting one to wonder if they shouted as loudly for Syrian refugees. Four arrests were reported but there were no reports of pepper spray or blast balls being used on demonstrators. 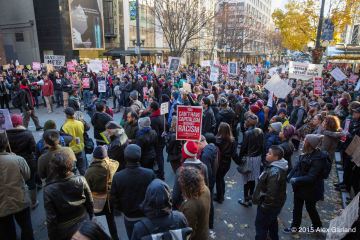 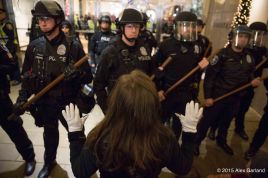 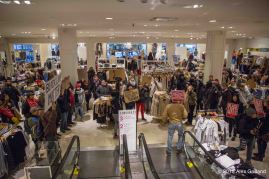 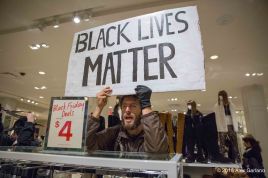 In addition to demanding an end to murders of people of color by police, activists also informed those gathered to watch a tree lighting of the unrelenting racism prevalent in society from the school to prison pipeline in education to the shooting death of Laquan McDonald. The numbers of those celebrating the tree lighting were down significantly from the year before, and those who made it downtown this year were greeted by surprises. One of those surprises was the significant amount of fireworks shot from the roof of Macy’s at the end of the countdown and the lighting of the tree. The other surprise was the balloon release when more than 20 helium filled “Merry Christmas” balloons were released with signs attached that read “Black Lives Matter” and “Fuck The Police” as the fireworks went off and the tree was lit. 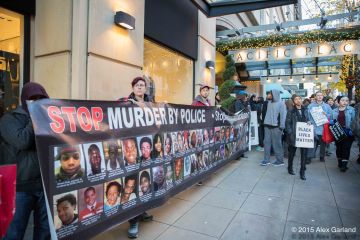 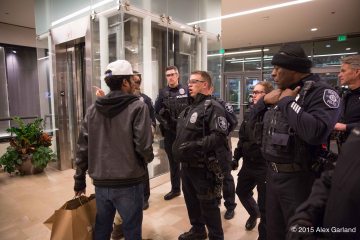 From the Facebook event page “#BlackLivesMatterFriday 2.0 : The Quest For Freedom  #BlackFriday Cheap Deals do NOT matter —#BlackLivesMatter   IF BLACK LIVES and your life matters More  than #BlackFriday Cheap deals?  –Then JOIN US and invite Everyone   THIS IS A NATIONAL EVENT   Freddie gray,Eric Garner ,Tamir Rice,, Tony Robinson and Sandra Bland were killed by police and hundreds of other unarmed people of color WERE KILLED BY POLICE in 2015 already  THIS HAS TO STOP-TIME TO Go on a quest for freedom AND PUT A END TO the POLICE BRUTALIZING PEOPLE AND The police MURDERING PEOPLE AND TIME TO END Racism and anti blackness  WE NEED TO COME TOGETHER AND BE UNITED AS ONE AGAINST injustice ,racism,oppression,police brutality and get JUSTICE FOR Freddie gray,Mike Brown,Tamir Rice,Tony Robison,Sandra Bland and hundreds of other unarmed people of color KILLED BY POLICE  people must gather and make a very visible and loud demonstration and do what it takes to get justice for Eric Garner and Freddie gray,,Tamir Rice,Tony Robison and hundreds of other unarmed people of color KILLED BY POLICE.Also, end racism and anti blackness and racial injustice and inequality ECT. ! Bring signs and , bring cardboard and markers so other people can make signs.  INVITE EVERYONE –Lets see who can invite the most to THIS EVENT  PLEASE RSVP IF YOUR GOING TO COME And Show UP- -Family Friendly-AND —- come rain or shine  NO WORK –NO SCHOOL –NO SHOPPING –NO EXCUSES   JUST HIT THE STREETS   Family friendly— come rain or shine  Media relations-http://blacklivesmatternotblackfriday.webstarts.com/contact.html  Questions— contact justice4mikebrownsea@hotmail.com  MORE INFO——-http://blacklivesmatternotblackfriday.webstarts.com/index.html  #BlackLivesMatter #NotBlackFriday #BlackLivesMatterFriday  #TAKEDOWNBLACKFRIDAY”