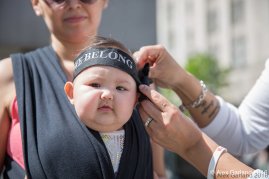 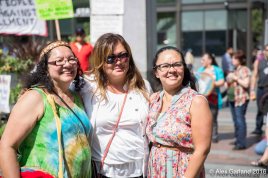 As the sun warmed the streets of Seattle on a hot Monday afternoon, Indigenous people from around the Pacific Northwest gathered at Westlake Park for a rally in protest of disenrollment of 306 members of the Nooksack tribe and other tribes around the United States who have diesenrolled tribal members. The rally included speakers from the Nooksack tribe, tribal leaders from the Snoqualmie tribe, and disenrolled members from tribes throughout Washington.

I asked Matt Remle, writer and editor at LastRealIndians.com about disenrollment. “In the 1930’s after the US gov forced US citizenship on tribes there was a bill passed called the Indian Reorganization Act, which forced tribes to develop tribal governments and dissolve traditional forms of government. The purpose was mainly to create a puppet tribal [governments] that would serve to basically rubber stamp allowing corporations to take resources from reservations despite broader tribal opposition. This lead to some pretty horrific internal battles over the decades where tribal [governments] acting on behalf of US corporate interest would stifle opposition with the support of the Feds. The stand off at Wounded Knee II in the 70’s is probably the most high profile example. I see disenrollment as a new chapter in silencing/stifling dissent.” 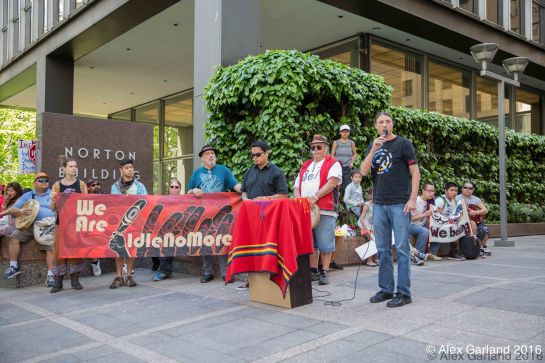 Matt Remle speaks about disenrollment at the Norton Building in Seattle.

Robert Upham spoke to the crowd about his personal experience with disenrollment. His grandmother (by adoption, not birth) passed on a piece of land to him as a child, but because of he was adopted he couldn’t own land belonging to his grandmother’s tribe. “There’s a lot of Indians that say, ‘this doesn’t matter, it’s what you feel in your heart’. It’s not like that. When I was a little kid, I couldn’t own land. Guess what, when I grew up, I couldn’t run for tribal council…Citizenship is more than what’s in your heart, it’s how you care for each other…This kind of meeting needs to be done at National Congress of American Indians.” Upham went on to remind the crowd to think seven generations ahead and explained his view on the situation. “I think this blood quantum, or where you’re born, or who your parents were, is a type of political positioning that makes it competitive for Indian people from the day we are born. Nobody else has to go through those kind of guidelines.”

Robert Upham shares his experience with disenrollment to a crowd at Westlake Park in Seattle.

The protest then took the streets from Westlake Park to 5th Avenue, down Madison and South on 2nd Avenue, ending at the Norton building, home to Morisset, Schlosser, Jozwiak, and Somerville law offices, the attorneys involved in the disenrollment of Nooksack tribal members. The march was flanked by SPD on bicycle and led by SPD on motorcycles who blocked streets and directed traffic along the route. After arrival at the Norton building, a few additional speakers addressed the crowd. A few minutes after arrival, a security guard at the Norton building instructed a handful of Native people to move from where they were sitting to the sidewalk 8 feet away, as they were on “private property”. Most decided to continue sitting and the property manager of the building instructed them to move, and they again refused. SPD was called over from where they parked their bicycles across the street, but no arrests were made and the demonstration came to a close soon after. 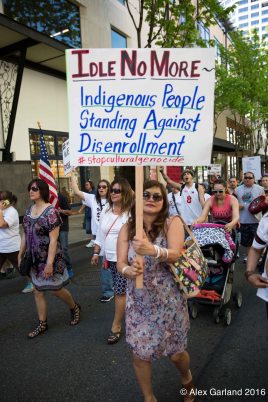 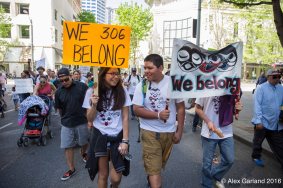 I asked Idle No More organizer, Sweetwater Nannauck, what her opinions were on the situation.”Native American tribes are sovereign and set their own rules regarding tribal enrollment and membership. In addition, enrollment or membership requirements often can be found in tribal constitutions or tribal codes. Most tribes have blood quantum and/or lineage requirements. Some are based on the Census or the allotment of land.” 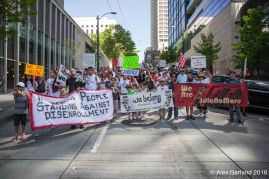 Nannauck continued, “Disenrolled members have appealed to federal courts and sometimes to state courts, often though there is no recourse. This is a modern day form of cultural genocide that is a huge injustice and goes against our original teachings and tribal values. Shielded by ‘tribal sovereignty’, fueled by greed, and inflicted upon ancestors, entire families, and even the children who are our future. This cultural genocide should not be tolerated and actions must be taken to rectify this situation immediately.”

Sweetwater Nannauck speaks to the crowd at Westlake Park in Seattle about disenrollment and it’s affects on tribal members.

While the enrollment requirements vary from tribe to tribe, the 306 Nooksack tribal members facing disenrollment feel they deserve recognition, regardless of results based on Census Bureau data, which can be spotty, or blood quantum that ignore those adopted into different tribes or disenfranchise those with a mixed heritage. Carolyn Lubeneau, Chairwoman of Snoqualmie Tribe, and someone who experienced disenrollment first hand stated, “I speak to you of the love I have for all Indian people and how much I admire and respect each and everyone for the struggles they have had to endure. My passion is to educate about this sickness of disenrolling families, children, and elders from their culture, from what sustains them.” Lubeneau ended her speech by calling for an amendment to the Indian Civil Rights Act and an enforcement of those laws and a protection of their human rights. 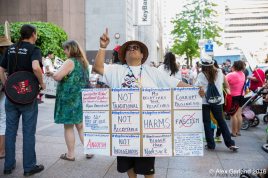 I asked Matt Remle what the next steps were in the new era of disenrollments and he responded, “Several tribal governments have begun taking to the passing laws to outright ban disenrollments, so if nothing else, all the attention paid to this issue will help stop the practice.” 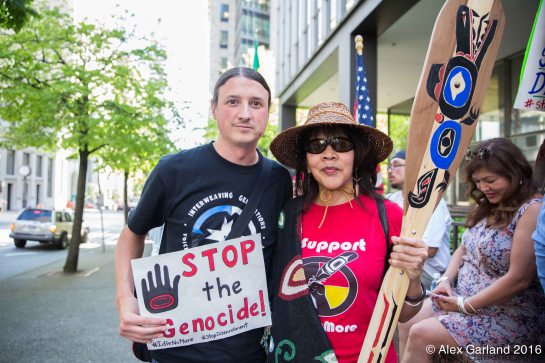 Remle and Nannauck pose for a photo at the end of the march to protest tribal disenrollment.

For additional photos and information, check out these articles…