Thousands gathered at Garfield high School to celebrate the life of Martin Luther King during a rally with speakers including members of the Garfield High School Black Student Union, members of the community, Sheley Secrest of the NAACP, Mayor Ed Murry and keynote speaker, Erin Jones.  As the thousands made their way into the streets, activists of all ages could be seen marching and carrying signs. The 2,000 marchers made their way down South Jackson St. to downtown Seattle while a group of 300 demonstrators split from the main march and turned North on 20th. The Seattle Police Department were taken by surprise as the group splintered and were reported to have set up barricades around the East Precinct, expecting that to be the target of the protest. The direct action march made their way to the parking lot of Uncle Ike’s Pot Shop where they heard spoken word from Black Lives Matter activists, experiences from the Central District, songs from indigenous activists, chants from activists with Bayan and information on gentrification and racism in Seattle.

Owner Ian Eisenburg could be seen watching the demonstration unfold in the parking lot of his business. After the march he commented “I can stomach a little inconvenience if the alternative is living someplace without protests and free speech.”  Activists managed to lock the doors of Uncle Ike’s with a bike lock, preventing any sales for the three hours the activists were assembled.

Evana Enabulele, one of the activists involved with the action commented “It is symbolic. The theme for this action was gentrification. It is ironic that we are marching blocks away yet the black community is being pushed out. The splinter march brought light to the ongoing poison that Ian Eisenberg and others are planting in the CD and all the other black areas. Honoring MLK’S dream is to keep the fight going whether it’s gentrification to food justice.”  While SPD maintained a presence, no arrests were made. 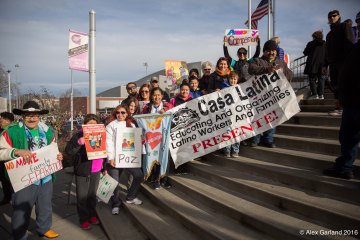 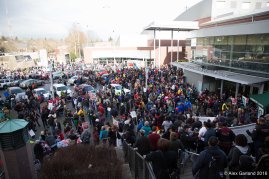 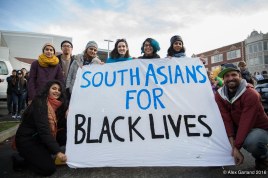 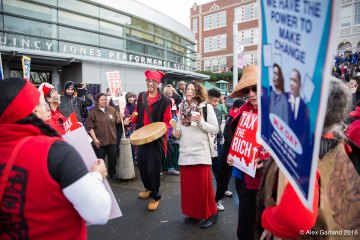 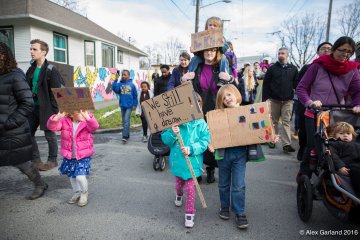 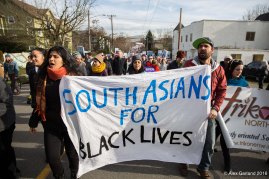 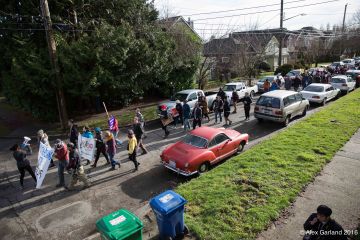 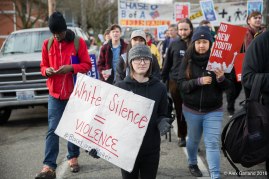 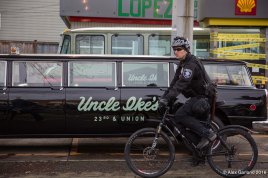 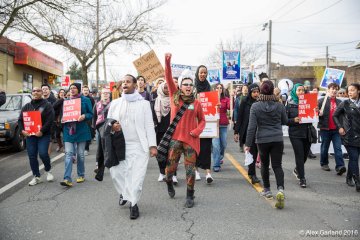 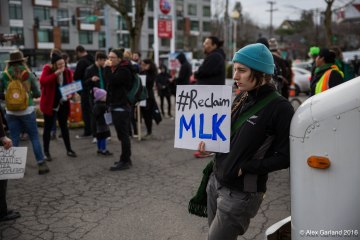 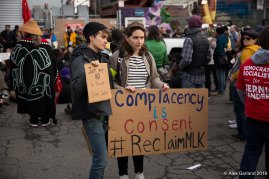 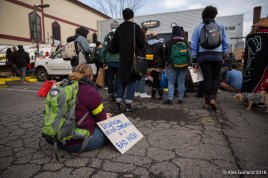 We have assembled at Uncle Ike’s today to stand up and speak out against gentrification and the harm it causes our communities.

Gentrification functions as an expression of capitalism, imperialism, colonialism, and exploitation. When this destructive process is aided and assisted by so-called “community leaders” of the local Black misleadership class, it is called neocolonialism.

The methods inherent in the process of gentrification are little different than the colonial practice of ‘peaceful’ subordination, encroachment, and expulsion of a people from spaces traditionally occupied by them and their ancestors. This was practiced in the Pacific Northwest during the eighteenth and nineteenth century against the indigenous populations by European and Anglo-American settlers. The same political and economic structures, ideologies, and dehumanization of vulnerable people is as alive in Seattle today as it was in 1855 when the Treaty of Point Elliott was signed.  Let us remind you that ALL of Seattle squats on stolen Duwamish and Salish land!

This process is ‘justified’ under the supposedly “colorblind” economic principle of supply and demand that also lacks any sense of JUSTICE.

These white newcomers, many from outside the city itself, buy homes and land for cheap in formerly red-lined areas, building or remodel houses, which drives up the property values of the homes around them until they are no longer affordable to the people who had been living there.
Or a developer, like Ian Eisenberg, buys up vast amounts of land and builds major apartments or condos too expensive for an oppressed community to afford. Either way the net result is the same, people are displaced and are sometimes made homeless.

There are some people who manage to hold onto their homes or apartments only to watch as their children suffer another harmful effect of colonialism (and neocolonialism); a white-washed, academically lacking, miseducation.

Marginalized as ‘minorities’ and ‘special education students’ in their schools, our cultural traditions are shunned, our methods of communication are stigmatized, and our history is all but ignored. Students of color are penalized for not becoming more like their oppressors, and as a result are suspended and expelled at three times the rate of their peers making them exceedingly likely to become trapped in the School-to-Prison Pipeline (STPP).

At the University of Washington, a public institution with over 40,000 students only approximately 3% are Black, when in Washington Black people make up 4.1% of the population, in King County 6.7%, and in Seattle 7.9%. Black youth in Seattle Public Schools (SPS) made up 4.5% of the students, but also over 50% of the students classified as being without a home.
Urban cities are, in essence, internal colonies replete with an occupying force known as law enforcement. These newcomers complain at advisory councils, such as, the East Precinct Advisory Council (EastPAC), about Black people and other people of color,  and demand that the police extricate or expel us from “their” neighborhoods and ruthlessly punish us for existing at all.

Over the past year, Black Lives Matter has brought back onto the public agenda how the police brutalize and terrorize people of color and are a slave catching force for the Prison Industrial Complex (PIC).

Ian Eisenberg, owner of Uncle Ike’s Recreational Marijuana Shop and owner of numerous properties in Seattle’s Central Area, YOU WILL:

1.       Hand over 54% of his real estate holdings to the community for the purpose of community controlled low income housing.

2.       Provide funds to be used for the legal defense of people of color with drug cases in Seattle and the cities that people have been gentrified to, and provide funds to the Black Community to lobby for retroactive marijuana laws.

4.       Build or provide funding for a community controlled center that will have programs, which include but are not limited to, addressing economic disparities, food justice, and the education gap experienced by people of color.

5.       Provide funds to assist people who have already been, or who will be, displaced by gentrification.

We are willing to take all necessary measures to satisfy the demands we’ve listed here.