Several hundred Chinese Americans gathered at Westlake Park to protest the firing, charges, and possible jail sentence for Peter Liang, found guilty of manslaughter in the death of 28 year old Akai Gurley. Protesters suggested the discharge of officer Liang’s gun was an accident and the firing and charges were to appease racial tensions between NYPD and the black community. Activists also discussed the need for accountability across the board in cases of police shootings and that had Liang been white, the NYPD may have sided with him instead of firing him.

When speaking with Black Lives Matter organizer Palca Shibale regarding concerns by Peter Liang supporters that a Chinese American officer was targeted specifically and that all officers should be held accountable, she responded “Yes, minority police officers are often more likely to be charged and convicted of crimes relative to white counterparts. All police should be held accountable but that is not accomplished by rallying to free Peter Liang for the murder of Akai Gurley.” When asked about the argument that since “the tragedy” was an accident, no crime was committed, Shibale replied “To say that no crime was committed is to ironically refuse recognition that Akai Gurley is dead. The term accident is also debatable. Is it also an accident that he failed to call an ambulance and on time out of fear of professional backlash? Regardless, the term manslaughter means without murderous intent. The argument that it is an “Accident” falls well under this category.” 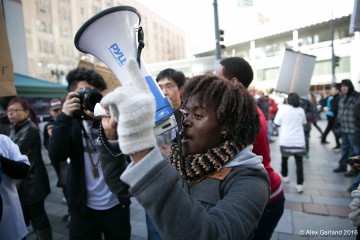 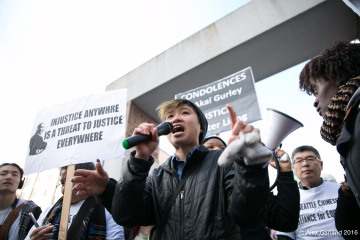 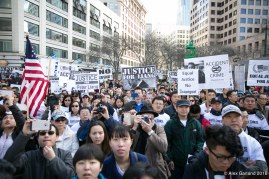 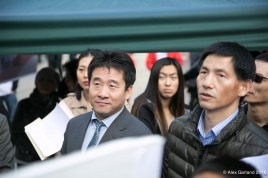 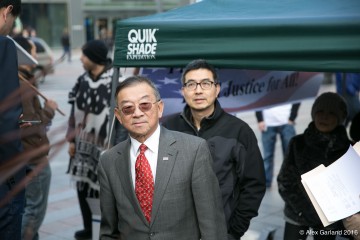 Yesterday, I was in a meeting with 4 of the organizers of the Peter Liang rally for seattle. It was an attempt to talk about the antiblackness of the event in hopes that this particular group of organizers would choose to cease support for Liang

After hours of dialogue and debate, no one was moved. So with 24 hours to go before the rally, Seattle Black book Club and Parisol partnered up for a counterally that we intended to structure for cross dialogue.

However when we got there, organizers would not even allow us to speak without censoring the message. We were not allowed to say “Peter Liang is a killer” or any sort of words that might humanize Akai too much that he overshadows Liang ‪#‎antiblackness‬

We all werent having it. We were vastly outnumbered but that didn’t stop us from marching on stage through the crowd and the hoards of folks attempting to stop us (Yall it was really rad!!!) And getting our message through improptu. ‪#‎disruptthestatusquo‬

What a powerfully intense scene! We held some serious space in this disruption. Which im honestly still surprised we pulled off so well given the opposition.But you could not ignore our unified message yall!!

From this disruption, Steps are now already being taken for a space of continued dialogue with the organizers and various community members who showed up in support of Liang.

There is always more need and more room to build even more unity with other marginalized populations of color against against a unified enemy. ‪#‎WhiteSupremacy‬ hurts both of our communities. Today was needed.