In a steady rain, nearly 40 activists gathered near the offices of Burlington Northern Santa Fe in Seattle before marching into the building and sitting in the lobby. The environmental and anti-oil train activists along with members of Seattle’s Raging Grannies, staged this occupation of BNSF with a request to discuss their demands with President and CEO Carl Ice (eventually including Berkshire Hathaway owner Warren Buffett who purchased BNSF in 2009 for $34 Billion).  Regional Director for Public Affairs with BNSF Railway, Courtney Wallace, greeted the activists, eventually acquiescing to the request of a phone call to Zak Andersen, the Vice President of Corporate Relations.

Activist and former attorney, Cynthia Linet, read the list of demands to Zak Andersen with the phone on speaker so activists could listen to the conversation. The list of demand can be read below. BNSF security called the Seattle Police Department and two units arrived within 10 minutes. Approximately 30 minutes later, a supervisor for SPD arrived. Over an hour and a half later the activists were seen leaving the offices and the police liaison Bob Barnes reported 13 were cited for 2nd degree criminal trespass but none were booked into jail. 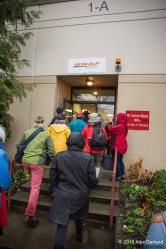 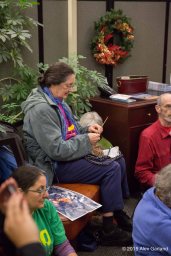 We are here today because we are deeply concerned about climate change, about the safety of human and ecological communities, and about justice. As a mode of transport, trains have the potential to be part of the solution to these concerns, yet in recent years we have seen the railways become instead a highway for commodities that pose an existential threat to us all.

As you know, Bakken crude oil is some of the most explosive and dangerous on earth. Between 2008 and 2014, the use of trains to carry Bakken oil exploded: from 9500 carloads/year to 400,000 carloads/year; it has continued to rise precipitously, despite repeated derailments, explosions and spills across the continent, including one that killed 47 people.

As you also know, coal has carbon impacts greater than any other fuel in the world, and climate change is viewed by the Pentagon and others as the world’s single greatest security threat. Right now, hundreds of thousands of people are in Paris, demanding that world leaders move beyond “political reality” and attend to the actual reality of the physics of our planet: our future depends on it. Business as usual–represented, fueled, and accelerated by fossil fuel transport–can lead us only to disaster. While the world is still dependent for now on some fossil fuel use, we have three modest demands, by which actions BNSF could show good faith in its intention to look towards a stable shared future, rather than a bottom line fattened by the destruction of our shared atmosphere.

Make no mistake: these demands are only the beginning. We will not stand idly by and allow our beautiful and fragile region to become a major transport depot for the world’s dirtiest and most dangerous fuels. BNSF in recent years has made its profits by beginning to make us precisely that. With the eyes of the world focused on the threats of climate change and the hopes of real and life-saving changes in our systems, now is the time for business leaders to show that they understand that business as usual is a threat to us all, and to commit to finding the quickest and most just way forward. We are all responsible for this. Companies like BNSF can be part of the solution if their leaders accept the reality of this moment in history.
In solidarity–”

The office takeover is part of worldwide actions happening around the 21st annual climate talks going on in Paris until the 12th of December. Every previous climate summit has failed to produce significant enforceable commitments by world leaders to act on climate change, and activists’ views on the current summit are mixed.

“Just like in past years, fossil fuel companies are sponsoring the climate talks and the voices of the people are going unheard,” said Emily Johnston, an organizer with 350 Seattle. “We don’t think the leaders of Western countries will be able to make a strong and effective agreement that will allow us to move as quickly and urgently as we need to.”

A January 2015 study found that most of the world’s fossil fuel reserves must stay in the ground to prevent global temperatures from rising above the 2C limit agreed upon by the leaders of Western countries. That limit, which is not scientific, has been criticized by leaders in the Global South.

“Communities of color here and worldwide are experiencing unprecedented numbers of extreme fires, floods, hurricanes, and droughts and it’s only getting worse,” said Jill Mangaliman, executive director of Got Green?. “We cannot rely on fossil fuel companies and carbon markets to fix this – they have caused this climate chaos. Instead, we must look to indigenous, black and brown frontline communities for leadership and solutions.”

Participants read a letter with three demands for BNSF: 1, that the company respect the treaty rights of Native Americans, in particular an agreement they made with a local tribe, the Swinomish, not to run more than one train per day through their reservation; 2, that all trains carrying Bakken crude, a particularly explosive type of oil, be staffed by at least two people; and 3, that those trains must not pass by Seattle stadiums while games are in progress.

“We need to transition away from fossil fuels now, and BNSF could be at the forefront of that transition by moving goods and people by rail,” said Valerie Costa, a local small business owner. “Instead, they’re contributing to catastrophic climate change by moving dangerous oil trains through our neighborhoods.”

The letter made clear that these demands are only the minimum expected from the company as mitigation for the dangers posed by fossil fuel extraction and transport.”