In protest of the previously thought dead Keystone XL Pipeline and the previously delayed Dakota Access Pipeline’s revival through an executive order from Donald Trump, hundreds arrived in just 5 hours from the onset of organizing in Seattle’s Westlake Park. After a rally with drumming and speakers, a short march brought activists to the Westlake branch of Wells Fargo where activists entered while drumming and singing. Although Westlake security attempted to prevent entry and eventually lowered the metal door preventing entry to Westlake Mall, no arrests were made. 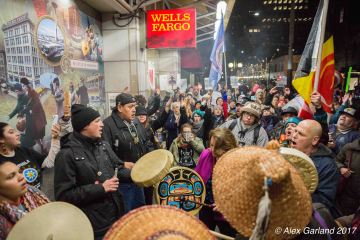 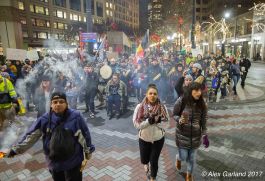